The Albuquerque International Balloon Fiesta is a simply amazing. I visited the 2007 Fiesta and was lucky enough to stay in my motorhome on the Fiesta grounds. This, in my opinion, is the best way to visit the Fiesta because you are right on the grounds and do not have to fight the heavy predawn traffic into the Balloon Fiesta grounds. If you have a motorhome and are thinking about visiting the Fiesta next October; book early. The spots go very fast. We camped in the VIP West section. This section is dry camping without hookups but, is closest to the Balloon activity.

An exciting facet of the Fiesta is that the general public can enter the balloon launching area and be right next to the balloons and their crews as the balloons are inflated and launched. The proximity of the activity allows photography without resorting to long telephoto lenses which are the mainstay of many other types of sports photography. In fact, I shot most of my images with a Canon 30D using a 24-70mm f/2.8L lens which was about the perfect focal length. I also carried a 350D with a 12-24mm f/4 Tokina lens for some of the overall views. While a tripod would be nice for many pre-dawn shots, the crowds milling around the inflating balloons would make use of a tripod very difficult.

There are three daily occurrences on weekends during the Fiesta which (again in my opinion) are the most photogenic.

The hot air balloons inflate in the pre-dawn and the colors are magnificent as the propane burners blast the hot air into the inflating balloons.

Dawn Patrol pilots take off in the dark and fly until it is light enough to see landing sites. Fellow balloonists appreciate the Dawn Patrol because they can watch the balloons and get an early idea of wind speeds and directions at different altitudes. On mass ascension days, about a dozen Dawn Patrol balloons perform the Dawn Patrol Show, a choreographed inflation and launch set to music that has been part of the Balloon Fiesta since 1996. Dawn Patrol inflations begin, weather permitting, at about 5:45 AM, with launch around 6:15 AM. I would recommend arriving well before the 5:45 AM launch time to see and photograph the balloon inflation which is the most spectacular part of the show.

Another recommendation is to use cell phones or walkie-talkie radios to keep track of the people who are with you. It is very easy to get separated in the vast crowds, especially if one of you is photographing and the other is not. My wife did not desire to go out in the cold pre-dawn for the dawn Patrol Show so we used walkie-talkies to communicate and get together after the Dawn Patrol launch and befoe the Mass Ascension launch.

The pre-dawn temperature in Albuquerque can be very cold; so dress accordingly. I recommend that you wear layered clothing because once the sun comes up, it can get warm and you will not have time to return to your car or RV and change clothing.

Of course have loads of memory available. It is an exciting event to shoot. I shot in raw so I could have control in post processing. A CPL filter may be nice on a medium telephoto lens but, not on a wide angle lens. There will be variances on the polarization over your frame when using a CPL with a wide angle lens. I did not use flash when shooting the pre-dawn inflation; preferring instead to capture the remarkable colors with available light.

Some of the neatest images are shot from the air showing baloons with the backdrop of countryside. It is expensive to book a balloon ride and you are at the mercy of the winds and the balloon pilot when you do. Most of the commercial balloon rides were so crowded that it might be difficult to achieve good photography while riding in one.

All Fiesta activities may be modified or cancelled in the interest of safety. On my first morning at the Fiesta, the Dawn Patrol inflation and launch went as expected, however on the second morning, high winds prevented take off after the balloons were inflated.

The Mass Ascension is absolutely spectacular and is almost visual overload. Imagine 750 hot air balloons of every shape and color launching in waves and filling the sky overhead. The blue New Mexico sky is ablaze with these beautiful balloons.
I would recommend that a photographer learn which side of the launch area will launch first and be there to cover the successive waves of balloon take-offs. The prevailing winds will determine which side of the field launches first and of course the wind direction will determine which way the balloons will fly. On my first morning, the prevailing winds pushed the balloons away from the launch area but, on the second day, the balloons flew right over the launch field. Of course, it is Mother Nature who will decide which way the balloons fly, but cross your fingers for a wind direction that will push the balloons back over the launch area. It is much more photogenic that way.

This is another spectacular event and one which a tripod is really necessary. The balloons are all inflated and glow in the night sky. They remain tethered and do not launch, however the sight is beautiful and the fireworks following the Balloon Glow are another spectacular event. I was not able to photograph these night events in 2007 because of family commitments in Albuquerque. However, I would recommend that they be part of any photographic plan. Just be sure that you plan ahead for the traffic jams that precede the Balloon Glow and Afterglow events and be patient during the even greater jams as the crowds leave the Fiesta area. 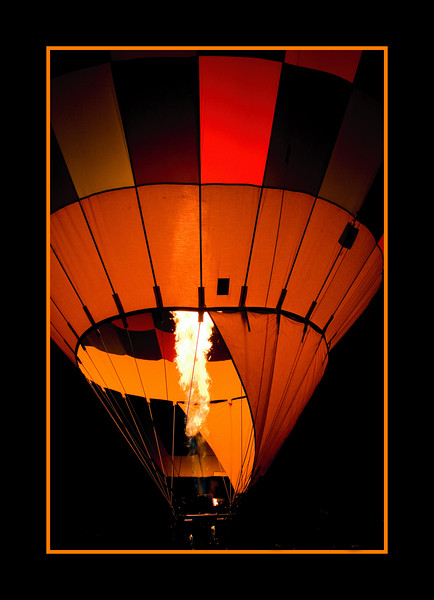